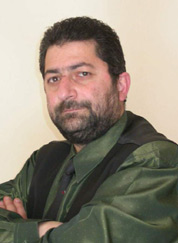 The leader of Armenian Arian Order

Born on January 15, 1963 in the city of Stepanavan of the Lori province of the Republic of Armenia. Since 1970 live in the city Abovian (Elar-Darani).

Finished Abovian’s Secondary School in 1980. From 1988 up to 1991, served in an Infantry Regiment of the Soviet Army. From 1983 up to 1988 studied at the Robotics Department of the College of Electronics based in Abovian as a technician-technologist.

On February 18, 1988 participated in the Armenian National Renaissance and Artsakh (Gharabagh) movements. Organized demonstrations demanding a free and independent Armenia. In 1989 devoted himself to the struggle for national independence. From 1990 up to 1994 fought in the fronts of Nakhichevan, Artsakh, and the borders of the Republic of Armenia. In 1990, was appointed Chief Commander of the “Kotayk” regiment (including volunteers from Abovian and the Kotayk region) of the Armenian National Army (ANA), having the title of Haryurapet (a commander responsible for up to 100 soldiers). Took part in the formation of volunteer units and in battles and self-defense activities in the borders of Armenia, Artsakh (Ghazanchi, Serkhavend, Derembon, Kichan, etc.), and the Shahumian district (Gaghtut, Manasishen, Gharachinar, Gulistan, Sheffek, etc.). In 1990, days before the formation of the Armenian National Army, initiated the formation of the Joint Council of the National Organizations of Abovian, which at the time assisted the city and region authorities who were in panic, performing most duties of the police. Later he was appointed as Hazarapet (responsible for up to 1000 soldiers) in the Armenian national Army. Member of the Military Council and Deputy Chief Commander dealing with political and ideological issues.

From 1993 up to 1997, participated in a correspondent course from ,,Vardanants,, University based in Yerevan receiving a lawyer’s certification. At the same time attended ,,Grigor Narekatsi,, University in Abovian also in the study of law. During this same time worked in a number of plants in Abovian, becoming head of a security guard unit responsible for a number of enterprises within the ,,Sirius,, military production complex.

From 1993 up to 1996, worked in the Executive Committee and other committees of the Abovian Municipal Council. From 1996 up to 1999, was elected and worked as a Board member for Abovian’s local self-government council. In 2000, worked as Director of the Abovian Youth Center, and was appointed (by transfer) as adviser to the mayor of the city Abovian.

At present, he works as Director of the Armenian Aryan Center located in Abovian, which has clubs for creative and performing arts, sports and martial arts. A prominent activist on the Armenian nationalist landscape, engaged in nationalist political and ideological activities. Author of brochures “Armenian Aryan Nationalist Union”, “Armenian National Army-Armenian Aryan Fist”,  “Good return Armenian Gods”, “Thinks of Armenian nationalist” and co-author of “Language as Guarantor of National Survival”. Author of the study “Armenian Aryan Union (Order)” and “Armenian-Arianism. agreement steps of pagan and christian”. Author of dozens of articles on history, ideology, as well as socio-political, analytical and other issues, published in Armenia and in the Diaspora. Has spoken on Armenian National TV and radio as well as on the Western radio channels “Freedom” and “Voice of America”.

In 1988 started studying the philosophies of General Garegin Nzhdeh. It was Garegin Nzhdeh who secured Zangezour (today’s southern part of Armenia). This stand came to be known as the heroic stand of Siunik against the Bolsheviks in 1921. His library includes all of Nzhdeh’s works.

From January 2005 up to march 2005 he was arrested for his political points (against antimoral and antination steps) and was sentenced to 2 years conditionly.

The leader of AAO was in Russia, USA and Iran with political visits. In Russia and in USA he had meetings with Armenian diaspora and in Iran he had meetings not only with diaspora but with some officials. He took part in seminar about Palestine-Israel (sionizm) relations and the seminar organized by ,,Islamic conference,,.

From the first marriage, has three daughters: Ani (1993), Arax (1995) and Arpi (1997).
From the second marriage has one daughter Astghik (2012) and son Areg (2016).
Armen Avetisyan’s  father, Vanik Minasi Avetisyan, died in 1988. His father’s parents, who were Armenians, relocated to present-day Armenia from the Kars and Erzrum regions of Western Armenia. His mother, Amalya Antoni Harutiunyan, died in 2000. Her parents, who were Armenians, hailed from the Lori province of Armenia.
The Supreme Counsel Of Armenian Arian Order
* * *